The time has come to pimp my nerdy ride!

I’ve wanted to install a mobile in my 2016 Mazda6 for a while, but I was held back by having other expensive radio goodies higher up on my list of priorities. Now that I’m taking the plunge, I settled on the Kenwood TM-D710G. It’s regarded as a solid performer for both VHF/UHF voice and APRS.

I installed the body of the radio in the trunk of the car, with the head unit mounted above my rear-view mirror. This location helps make it less obvious from the outside, and thus hopefully deters theft a bit.

I suspect you may have found this post in your search for information about installing a mobile radio. As such, the rest of this post is a walk-through of my install. Please excuse my messy car 🙂

Prior to buying the radio, I went ahead and purchased the cabling that would need to be run to install the radio. This included:

Before I started working in the car, I did a few things inside: 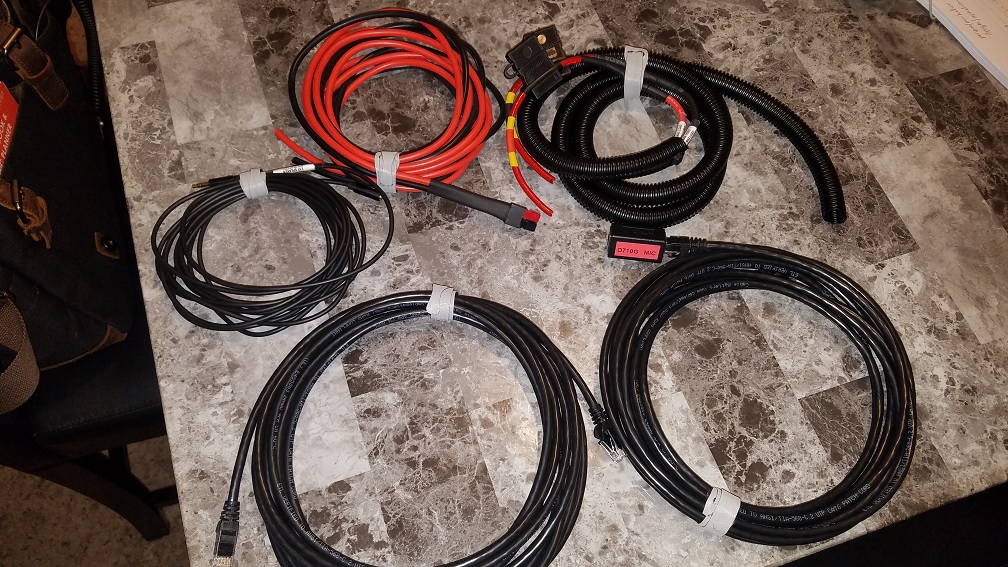 The most difficult part of the installation was getting the DC wires through the firewall. My car has a single large, thick rubber grommet for the wiring harness near the steering column. To access this on the engine side, you have to remove the battery. 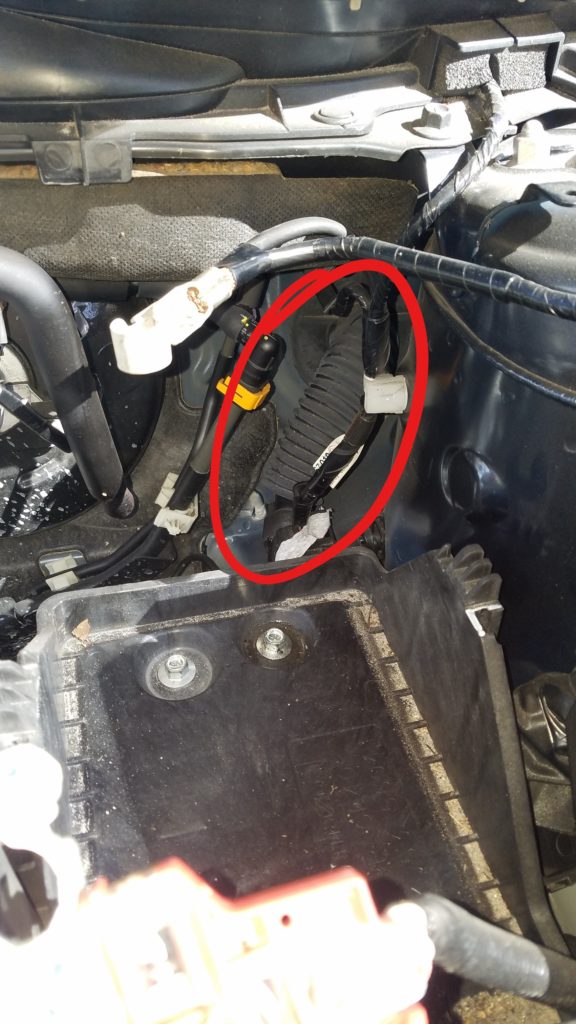 I wound up making a small slit in the rubber tube that leads up to the grommet from the engine side. This allowed me to slide my wires in so that they would come out of the main opening on the other side. I wound up taping them to a fast food straw to push them through. It was stiff enough to get them through, but flexible enough to work well in that tight space. 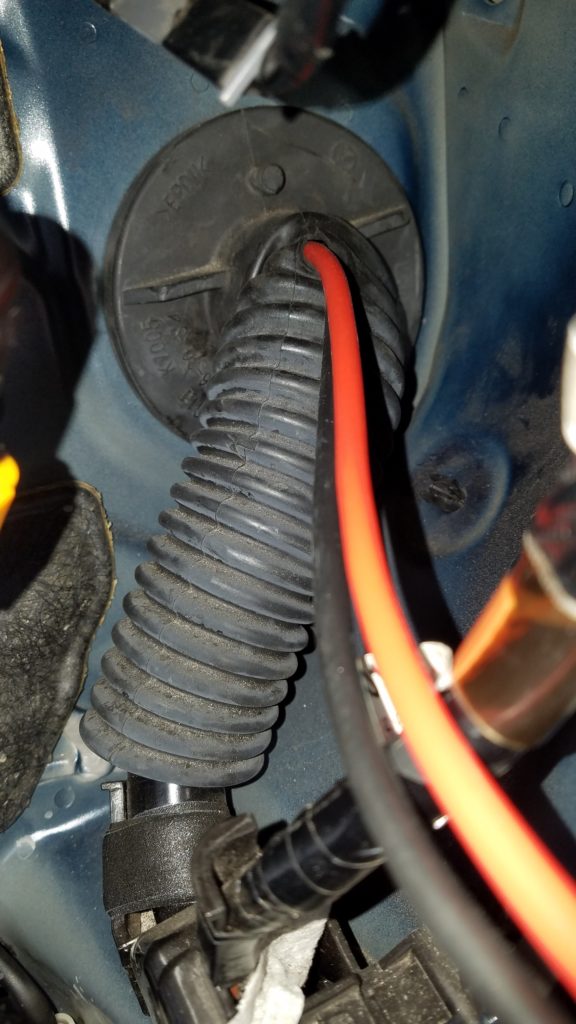 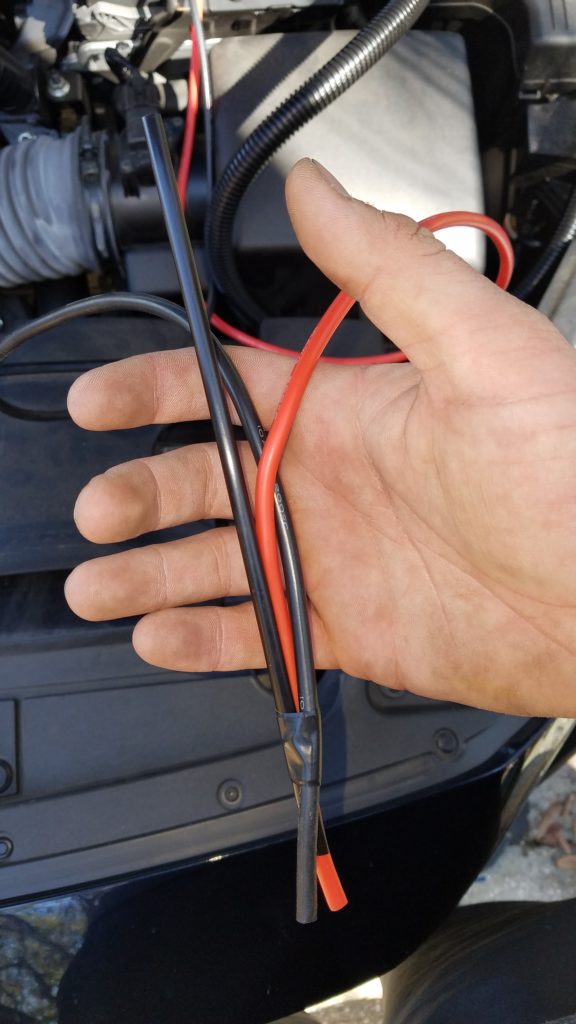 Once through, I routed the wires out of the way of anything in the engine compartment, and covered them with a plastic wire loom to prevent abrasion (and thus, short circuit/fire!) I also used this protective loom anywhere the power cables would be rubbed against, such as under trim pieces. 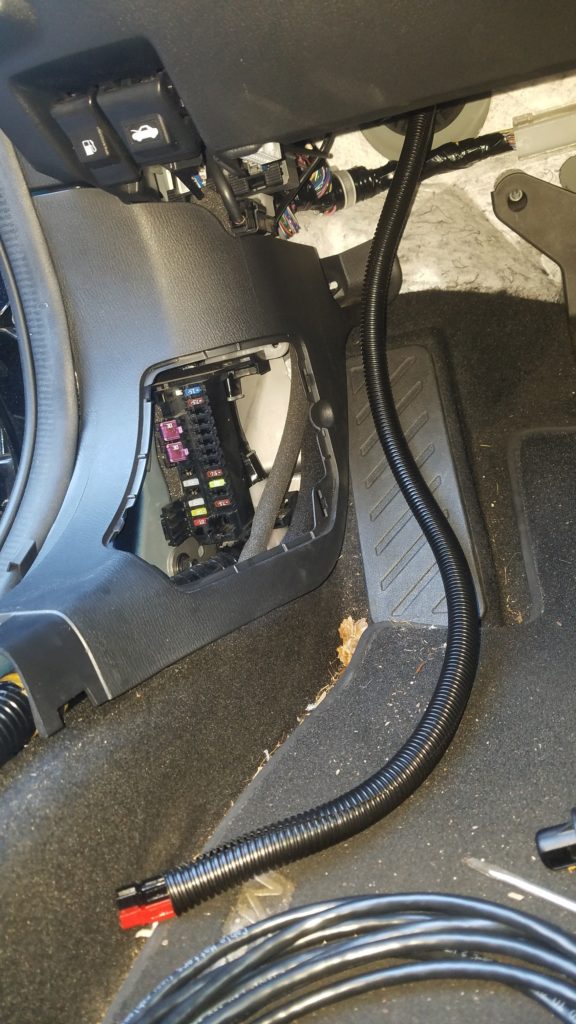 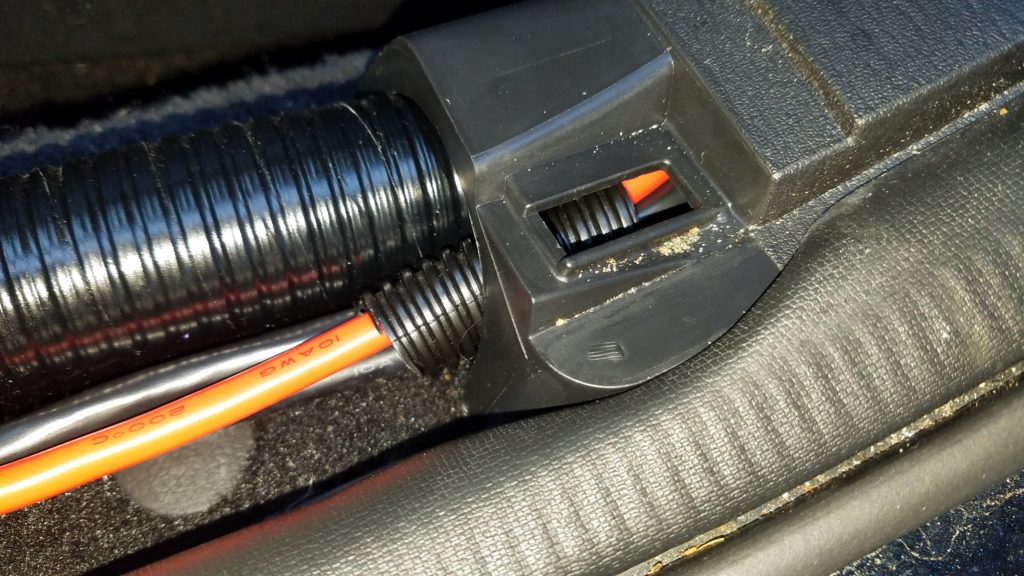 The Mazda6 trim pieces are fairly easy to remove. Most of my wiring was along the bottom of my doors, which was as simple as gently pulling off the covers, then guiding the wires along. They snap back into place when you’re done. 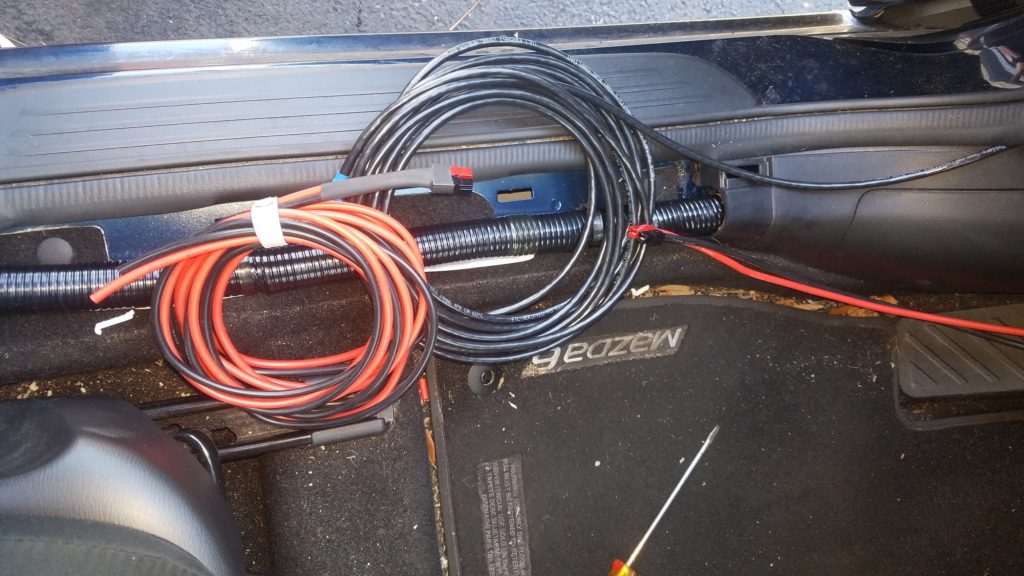 For my installation, I placed the head unit above my rear-view mirror. This meant running an Ethernet cable under the headliner from the center to the left post, down that post, under the weather strip, and down to the fuse panel area before joining the power cables to go under the trim. The driver’s side of the car carried power and the head unit cable. On the passenger side, I ran an Ethernet cable for the microphone and a headphone extension cable for the external speaker. The speaker and mic clip were attached to a seat-bolt mount. 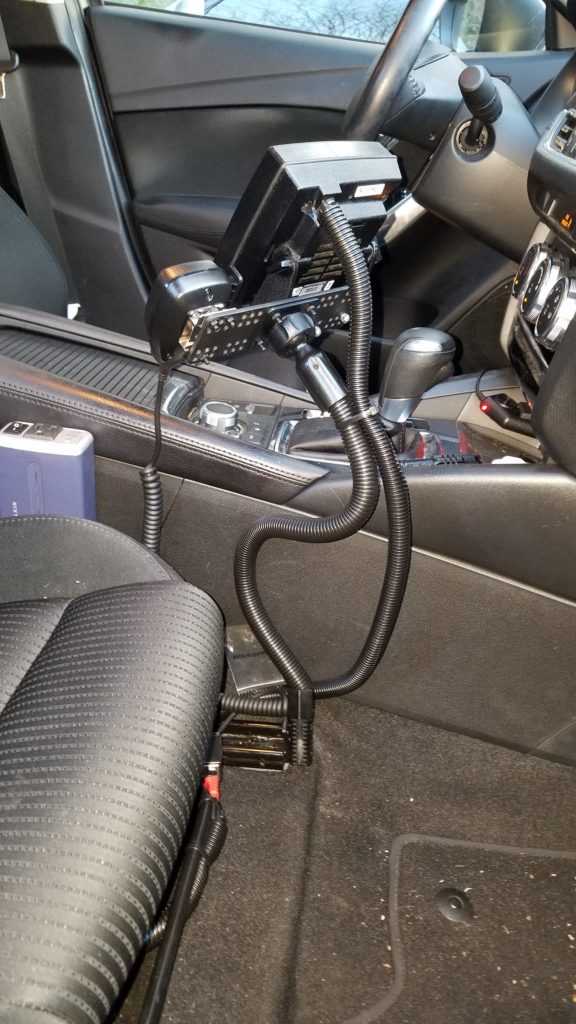 The main body of the radio was mounted in the trunk. To install it, I identified an unused hole in the sheet metal between the trunk and rear deck.  I gently removed the center brake light from the rear deck and inserted a bolt through the hole from the top. I then used a wingnut and a small dab of blue LocTite to attach the radio’s mounting bracket to this bolt. The end result is a radio body that has airflow around it and isn’t in the way of the trunk contents. 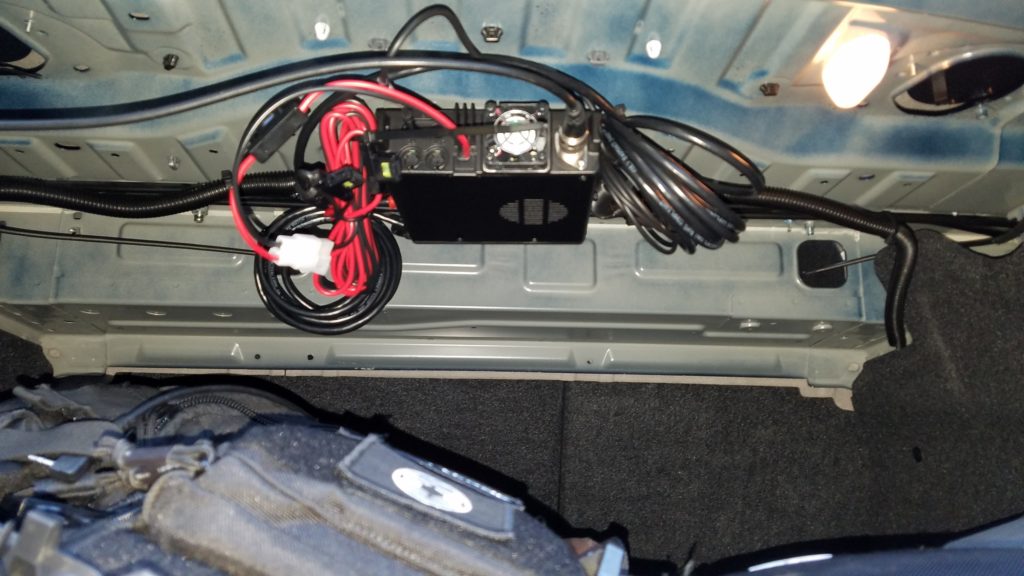 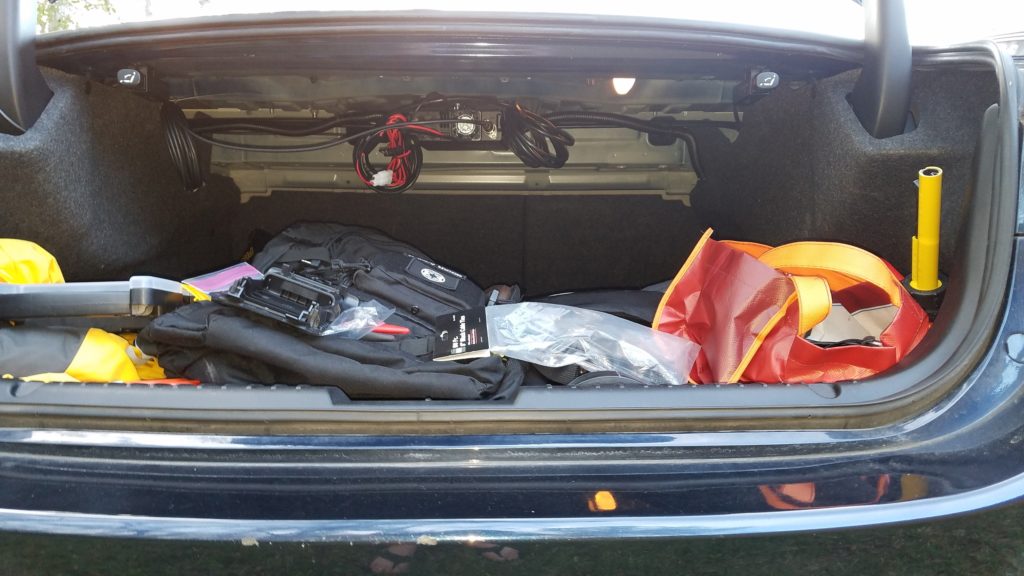 The finished installation looks very clean and works very well. Since the external speaker fires directly at me, I can keep it at a lower volume while still following the chatter. The location of the head unit means I can quickly glance at it while keeping the road in my peripheral vision. 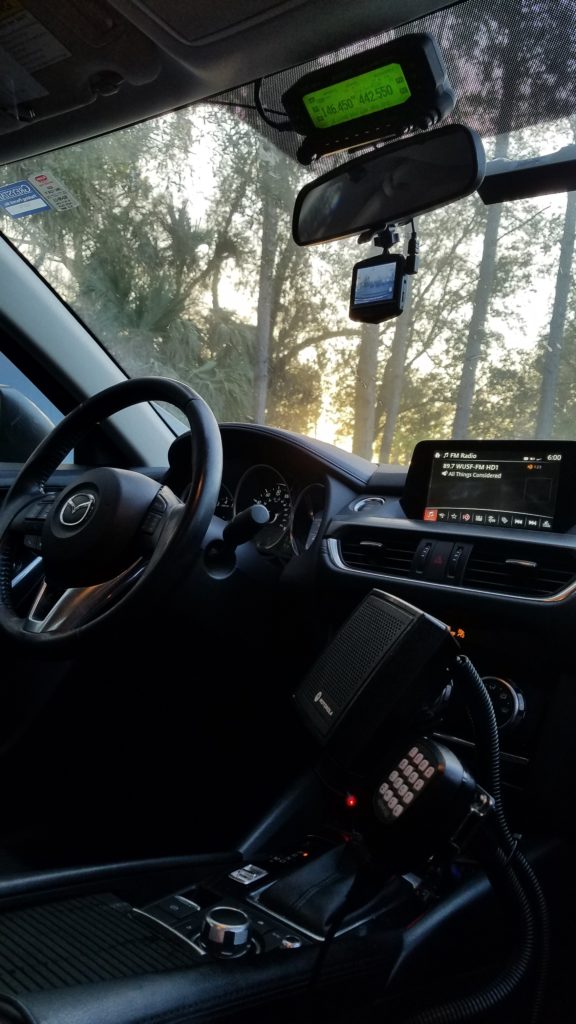 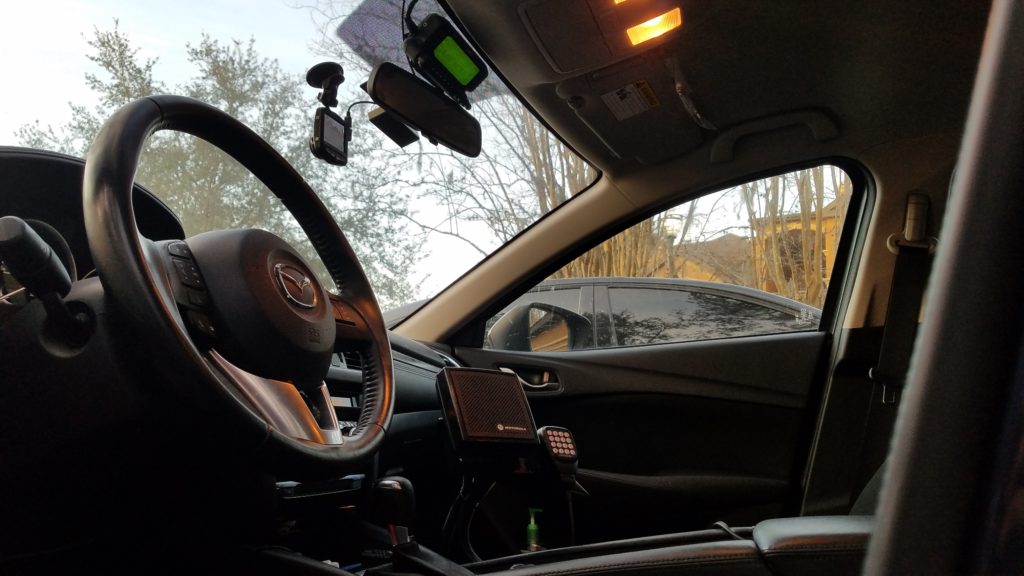 Thanks for reading, and if you have any questions about the installation, don’t hesitate to give me a shout via email or Twitter.