After two days, FLSPOTA ‘18 is in the log, and it was a ton of fun. We activated my #1 and #2 most desired parks, and neither disappointed.

Saturday I operated with Anson WU2F and Pat KX4HL. Sunday was just WU2F and I. We jointly worked 62 stations, but unfortunately none were other FLSPOTA operators, except NJ4Y working the K4LKL bonus station – which we worked via AO-91 for the satellite bonus.

This year’s goal was to select parks with historical significance, and I think we succeeded.

On Saturday, we activated Egmont Key State Park, on its namesake island in the middle of Tampa Bay. Because of its location, Egmont Key was utilized militarily as far back as the Civil War. During the Spanish-American War in 1898, fortifications were made to the island to defend against invasion by Spain. The artillery batteries pictured below are enduring symbols of this point in time, though the guns and mounts were removed years ago. 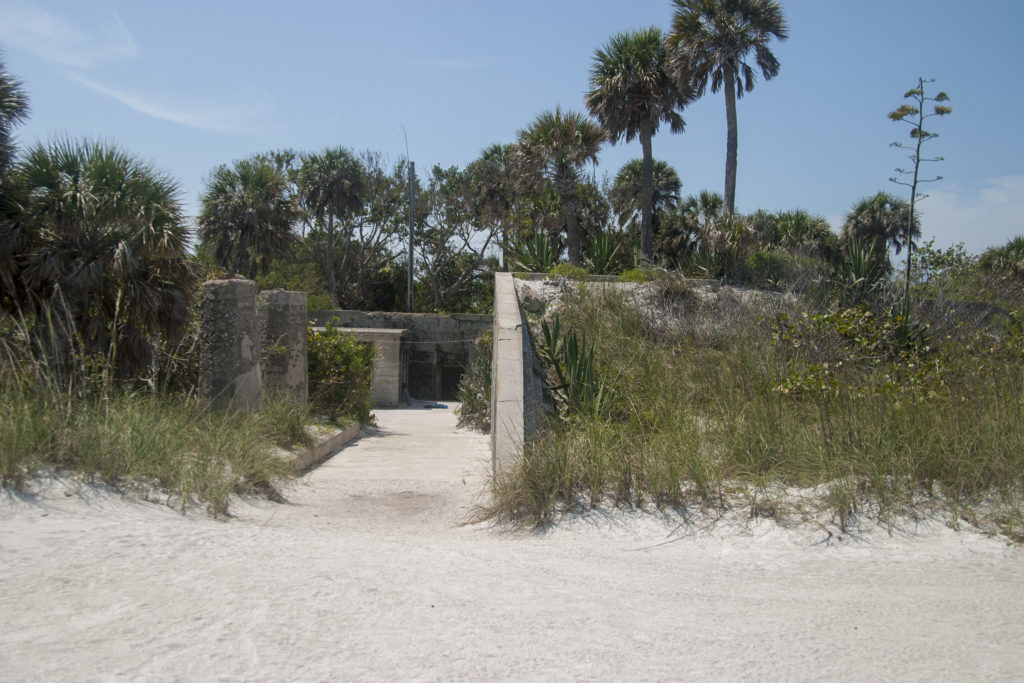 The installation was deactivated and reactivated several times in the decades that followed, but the island has not seen military occupation since the late 1970s. Around that time, the island was established as Egmont Key National Wildlife Refuge, and the island was added to the National Register of Historic Places in December 1978.

We set up in the generator house at Battery Mellon, which is at the northwest corner of the island. We set up two stations: my Yaesu 450D with an HFedz end-fed in an inverted-V configuration, and KX4HL’s FT-891 using resonant verticals he built. We were cognizant of the historical nature of the site, so we made sure the installation wouldn’t cause any damage; we simply tied our Spiderbeam masts to two poles. Also worth noting is that we were surrounded by saltwater – talk about a ground plane!

Conditions weren’t great, matching the SWPC forecast. The solar flux was 67, Kp and Ap indices were 5 and 2, respectively. Regardless, we got 58 stations into the log – 26 on 20m and 32 on 40m – and got to see some history up close on a beautiful subtropical island.

On Sunday, we traveled down to Sebring, in the middle of the state, to activate Highlands Hammock State Park. This beautiful park is comprised of “15 distinct natural communities in its more than 9,000 acres that include large tracts of pine flatwoods, hydric hammock, cypress swamp, and baygall.” The park was established by the United States Civilian Conservation Corps 4 years prior to its acquisition by the Florida Park Service. To call this park beautiful and expansive would be a grand understatement.

We set up our station in the Bobcat pavilion, utilizing my 450D and the same antenna as the 20 meter Egmont Key station.

We also brought my Kenwood D710G mobile and Arrow antenna to attempt the satellite bonus. We tried and tried to break into a morning AO-92 pass but couldn’t break the squelch… turns out I failed to check the satellite schedule and it was in L/V mode. Oops ????????

We did succeed in working K4LKL through an afternoon AO-91 pass, though it was hard to get a word in between the stations attempting to work a Cuba station in a rare grid.

Propagation on Sunday was significantly worse than Saturday, which wasn’t a high bar to begin with. Over the course of the day, despite hours of trying 20m/40m SSB and PSK31, we made 3 HF contacts: 1 on 20m and 2 on 40m.

Since conditions weren’t cooperating, we decided to break down our station earlier than expected and go exploring some of the nature trails in the park. Our first stop was the old Cypress Swamp Trail, which included the coolest trail/boardwalk I’ve experienced in a Florida State Park. It was low to the ground, narrow, and only had a railing on one side. I felt like I was floating just above the forest floor, intimately connected with the environment around me.

Next, we visited the Ancient Hammock Trail. This was more of a traditional trail through a Florida forest, a dirt path winding between dense ferns, towering live oaks and even some orange trees.

Our final stop was the Fern Garden Trail. This trail was mostly boardwalk through a swamp teeming with birds and flowers. Down this trail we saw our only significant wildlife of the day: a couple great egrets, 5 or 6 wood storks, two Florida banded water snakes, and a wild otter! The swamp was serene and beautiful, and photos just can’t do it justice.

All in all, despite the poor radio conditions and a score below our goal, it was an incredible weekend. Egmont Key has been my most desired activation since my introduction to POTA, and Highlands Hammock was a close second. To knock them out in one weekend was great. I hope you’ve enjoyed the photos, and I hope you go check out these amazing sites for yourself!